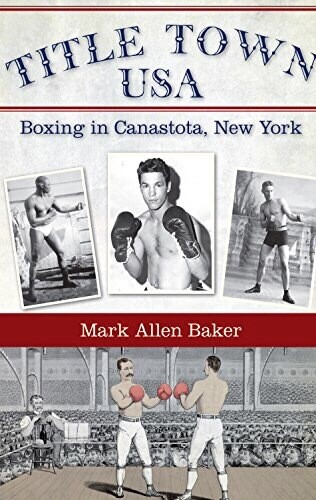 Canastota, New York, at the epicenter of Upstate New York's rich boxing heritage, is home to the International Boxing Hall of Fame. Having produced some of boxing's most prominent pugilists, including Carmen Basilio and Billy Backus, the area has also hosted many legendary fighters, including Jack Britton, Harry Greb, Sam Langford and Tommy Ryan. Many boxing dreams have come true here through title fights and epic ring rivalries. Author Mark Allen Baker tells the story of those "thunder gods of the ring" and the fights that made them famous, finally settling the score: Canastota is "Title Town, USA."

Mark Allen Baker is a former business executive (General Electric/Genigraphics Corporation, assistant to the president and CEO), author (fifteen books), historian and writer (over two hundred articles). A graduate of the State University of New York, with postgraduate work completed at MIT, RIT and George Washington University, his expertise has been referenced in numerous periodicals, including USA Today, Sports Illustrated and Money magazine. Following his 1997 book, Goldmine's Price Guide to Rock & Roll Memorabilia, he appeared as a co-host on the VH-1 series Rock Collectors. Baker has also been a featured speaker at many events, including the Hemingway Days Festival and Writers Conference in Key West, Florida. He may also be familiar to some as the former co-owner of Bleachers Restaurant & Sports Bar (Liverpool, New York). Acting as a historian for the International Boxing Hall of Fame, Baker is the only individual who has been a volunteer, chairperson and sponsor of an Induction Weekend event, both inside and outside the village of Canastota